I’m building an 8-bit computer capable of running Pong! This post is about my first steps with getting the display working.

Choosing a display, the philosophy of the project

In my last post, I settled on a display to use, but after a helpful conversation on Twitter, I realised that this probably wasn’t the right display for me. It only had a serial interface, which felt like a downside because I’d only be able to send one bit of data at a time, meaning it would take more clock cycles to write the image. But the real nail in the coffin was discovering that the computer would need to include a graphics buffer because the display didn’t have one of its own. Even for that small display, the graphics buffer would need almost all of the RAM available.

This raises a question about the philosophy of the project. Am I comfortable with buying a display unit with lots of bells and whistles, or does that defeat the point of building a computer from scratch?

After a bit of thought, I decided I was pretty comfortable buying in components that felt ancillary rather than core to the computer. Maybe by the time I finish the build, I’ll feel competent to build those kinds of things from scratch, but building all the other components of the computer feels like enough of a challenging project for now.

I’m also buying in one other component: the power supply. A power supply would be much easier to build than a display, but it just doesn’t interest me as a challenge.

Starting the search for the display again, I landed on the Adafruit 2.8” TFT LCD. It has a parallel 8-bit interface, and it also has 18-bit colour and a touchscreen which could be fun if I ever extend the project beyond Pong. It also has a “window” function to make it easy to update smaller areas of the whole display.

More importantly, it has its own graphics buffer and has good documentation. The datasheet on the controller seems clear, and Adafruit provide an Arduino library for it. Now that library can’t be integrated with my project (I’m not using a higher-level device like Arduino or Raspberry Pi), but it is a useful working example of the display in action for me to refer to.

It’s worth noting that the new display does cause some extra problems - two bytes are required per pixel, because the display supports 16-bit colour. And it’s 320 pixels wide, which is a bigger number than I can store in a single 8-bit number. I think those problems are worth taking on, to have a nice & usable display.

I had a bit of a false start the first time I soldered the mount to the display. 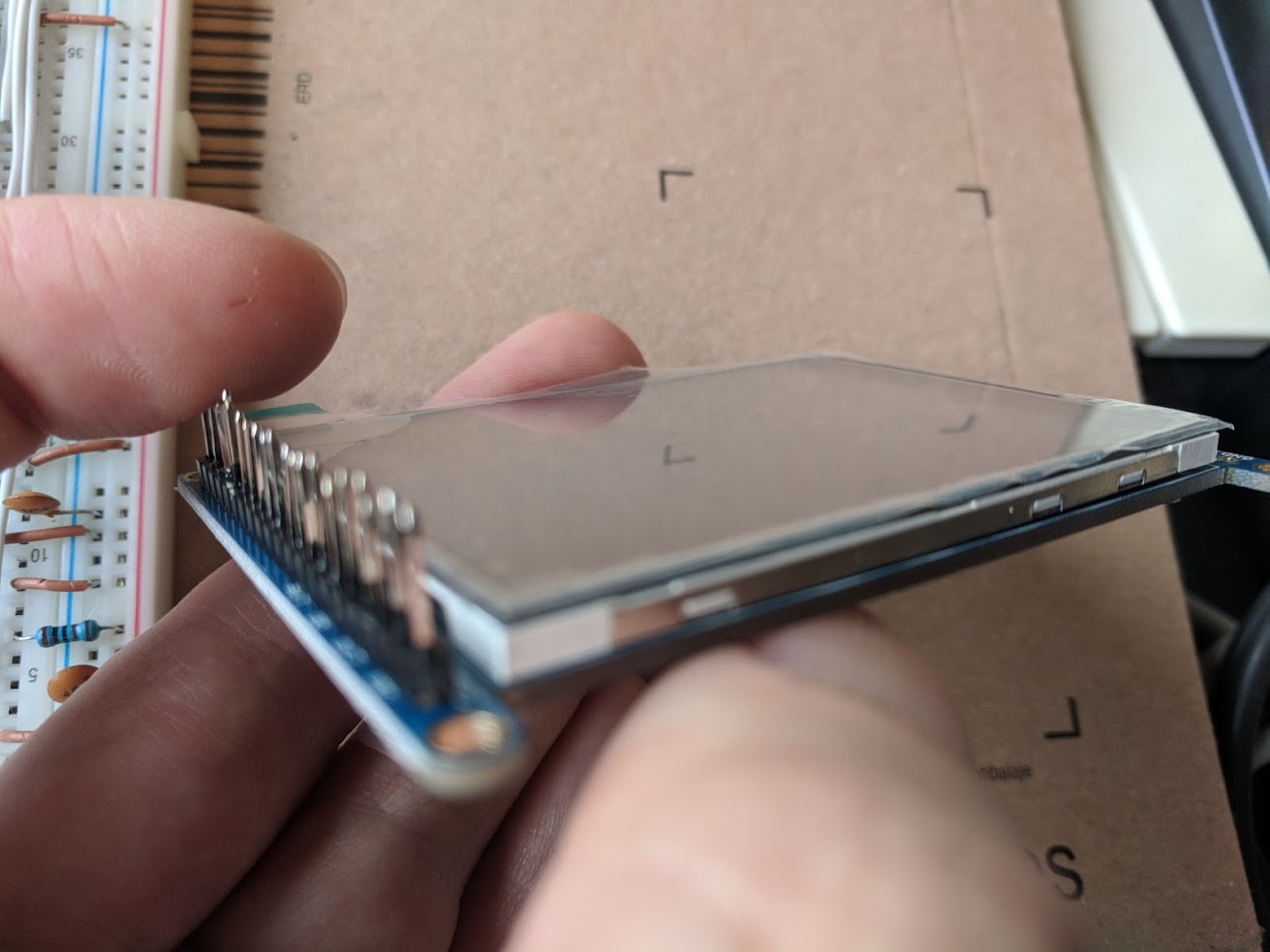 Making sure I can control the display

I decided my first step should be to make sure that I understand the display well enough to get something showing on there, even if it’s very basic.

To start with, I read through the relevant bits of the datasheet. In summary:

My other source is the Adafruit library for Arduino. I walked through each line of code that would run when initialising the display and drawing some pixels.

For my testing, I’m going to do a reduced version of this. It’s pretty laborious because I’m inputting all of these things by plugging and unplugging jumpers, then pressing a button attached to the write pin for the chip to read my data.

It’ll be faster when I can automate this with code: I’ve been playing with the resistors and capacitor of the automatic clock to make it run faster, and it’s now going at about 11kHz which should be just about enough for running Pong.

I manually input all of those commands and data and, sure enough, it works! I took a quick video of it in action (and slowed the clock right down in the middle so you can see individual pixels changing).

Got the display working from hardware - progress! pic.twitter.com/kgCABqXZvU

Now that I’m comfortable that I can get the display working, I’m going to put it to one side and build more of the rest of the computer. The next step will be to build the registers.